While pinworms and roundworms have fairly efficient life cycles, strongyles have a very unusual method of reproduction, especially considering that they developed in a desert environment. Large and small strongyles share identical life cycles outside of the horse but behave very differently once they're ingested.

Eggs are passed in the fecal material, just like ascarid eggs. Unlike ascarid eggs, which remain in egg form until they are ingested by the horse, strongyle eggs hatch into larvae in the manure paddy when weather conditions are favorable. From here, they go through a series of three molts. It's the third stage that can infect the horse. Under optimal conditions, third-stage larvae can live for up to three months. For their species to survive, strongyles must be ingested shortly after molting to this stage. 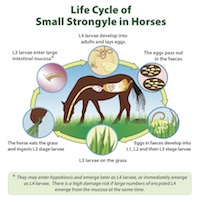 To increase its chances for survival, the larva climbs up on blades of grass where a horse can ingest it while grazing. This is less likely under natural conditions, because the horse herd that deposited this larvae-ridden manure may have migrated many miles.

Strongyles are prolific egg layers. A single horse can pass 75-100 million eggs daily. The eggs can crawl up and down a blade of grass many times or bury themselves in the soil to protect against adverse weather.

Small strongyles also developed another unique trait - the ability to encyst themselves in the horse's tissues and remain in an encysted state for a prolonged time. Unfortunately, it causes real problems for the horse.

This encysted state helps the small strongyle: When larvae are ingested, they immediately penetrate the bowel lining and begin a two- to three-month migration in the intestinal tract. The immune system recognizes these migrating parasites as foreign invaders and sends its defense cells to deal with the invasion. Because the migrating parasites are too large and are moving, the defense mechanism can't deal with them effectively. The only result from the immune response is mucosal inflammation.

If the horse already has an adult population of this parasite, there appears to be a communication between the adult population and the migrating larvae. This negative feedback tells the larvae, "We have enough adults laying eggs in the intestine. Slow your migration and wait your turn to become an adult." Once the larva slows its migration, the immune system can deal with this invader and surround it with scar tissue.

The small strongyle has developed a way to make the horse an egg-laying machine, and keep it that way with only occasional exposure to the larvae. Horses only have to pick up these infected larvae one time every two or three years for the small strongyle's life cycle to function.

Small strongyles, however, are the most significant causes of chronic under-performance, loss of condition, feed inefficiency and predisposition to secondary disease.

The pattern of migration for Strongylus vulgaris, a large strongyle, is quite different. Eggs are passed in the feces and develop through two larval stages. When a third-stage larva is ingested, it migrates to the large intestine, where it loses its sheath and penetrates the intestinal wall. The fourth-stage larvae penetrate the submucosal arterioles and migrate to the cranial mesenteric artery - the artery that supplies blood throughout the intestinal tract - where they molt to the fifth stage. These larvae return via intestinal arteries to the gut, where they reproduce.

No matter where a strongyle larva penetrates, leaves the gut and begins its migration, it will always end up at the same spot - the beginning of the cranial mesenteric artery, which is the primary blood source for the intestinal tract. All these larvae in one spot cause tremendous damage and reaction. In fact, in rare cases, the artery can rupture, causing rapid death. The more common problem is a weakening of the arterial wall, which can lead to a malformed artery - an aneurysm. This malformation causes abnormal blood flow, which can lead to formation of blood clots in the artery. These clots cling to the artery walls like clusters of grapes. Should one of these clots break free, it will be forced downstream in the blood supply of the intestines, where it may block blood flow. This situation, called thromboembolic colic, can result in serious illness and death.