Lungworm is also known as Hoose or Husk. Lungworm infestation is more prevalent in Europe than in North America.

Courtesy of Department of Agriculture, Food and the Marine, Ireland

Clinical signs of infection include coughing and difficulty in breathing. Affected cattle have an increased susceptibility to infective pneumonia. Immunity to lungworm develops quickly but is relatively short-lasting (approx. 6 months) in the absence of further infection.

Courtesy of Department of Agriculture, Food and the Marine, Ireland

At the start of each grazing season, following housing, cattle may have very little or no immunity to lungworm and thus are susceptible to new infections again. The periods of greatest challenge in temperate climates for animals are late summer and autumn. Reinfection Syndrome occurs in cows that are partly immune to Lungworm that are exposed to heavy larval challenge from pasture recently grazed by young susceptible animals. The cows may develop severe coughing and/ or milk drop as their immune system kills the migrating larvae. Such animals will not have Lungworm larvae detectable in faeces.

The lungworm lifecycle is uniquely adapted amongst roundworms. 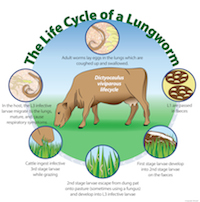 The life cycle of a lungworm begins with an ingestion of infective larvae. The larvae then penetrate the intestinal wall, and from here migrate into the lungs through the bloodstream. The infected larvae reside in the lungs until the development into an adult lungworm. The eggs of the adult hatch; producing L1 larvae. The eggs or L1 larvae that reside in the lungs are coughed up and then ingested back into the stomach and released into the environment via the faeces.

The spread of lungworm is helped by a fungus (Pilobolus).

This orange fungus, regularly seen on cow dung pats in pastures, explodes, spreading the lungworm larvae all over the pasture.

How The Bimectin Range Can Help