Mange in cattle is caused by mites. In the UK & Ireland there are 3 species of mange mites which affect cattle.

Mange is mainly a problem in autumn, winter and early spring as cattle are housed, with mites becoming less active and numbers reducing in the summer. 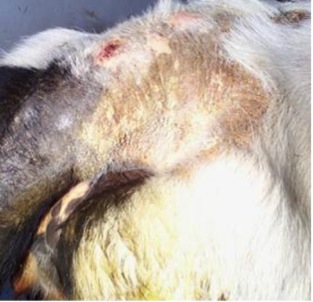 Chorioptes bovis is common in housed cattle and is relatively harmless. It is more prevalent during the winter and often spontaneously regresses in summer. The pastern areas of the legs are preferred sites for the mites, though these mites are also found on the neck and tail head area. A high proportion of cattle can be infested without showing clinical signs. Some cattle will show hair loss which gradually increases in size and can cause irritation. Hide damage may be noted as cattle rub the affected areas.

Psoroptic mange occurs worldwide and there are reports of disease in the UK caused by infestation with Psoroptes ovis thought to have arisen following the importation of infested cattle. 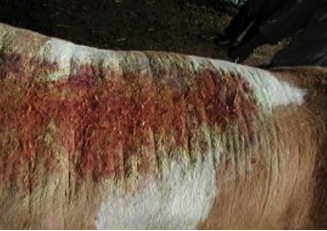 Serum exudation and thickening of the skin particularly over the neck and over the dorsal midline is reported. In some cattle Psoroptic mange can cause severe clinical signs with adverse effects upon health and welfare. Bacterial infection of affected areas is common, leading to bleeding. If lesions are extensive, production losses will occur. In severe cases, death can result.

Sarcoptic mange occurs worldwide but is rare in the UK & Ireland. Infestation causes severe pruritus with serum exudation and gross thickening of the skin, particularly over the neck. These mites are usually found on the neck and in the loin area next to the tail. As the name suggests, these mites borrow through the skin and cause severe irritation and skin damage. Skin will become thick and crusted and may become infected. This impairs productivity.

Sarcoptic mange can be transferred to human beings.