Bimeda Vet, Rachel Mallet writes about the issues of lice in cattle and sheep.

It’s that time of year where everyone begins to prepare for winter and to consider appropriate treatment of the parasitic problems that our stock carry in to housing, namely liver fluke, nematodes and ectoparasites. Of the ectoparasites, pediculosis is the biggest cause for concern in cattle when housed and one of the biggest issues in sheep, second only to scab. Ironically lice infestation, treatment and control are often overlooked by the farmer and the vet leading to heavy challenges with welfare implications and loss of margin.

At any point in time cattle are likely to have a low burden of lice which live in the coat. These small numbers are generally not significant, however, in certain situations the lice burden can greatly increase. In some animals the lice themselves will cause direct problems, resulting in less time feeding and damaged hides which will impact the profit margins for the farmer and the welfare of the animals. Lice may not cause apparent issues; however infestation could be the first indication of underlying disease as they seem to be able to exploit animals which are in poor health. 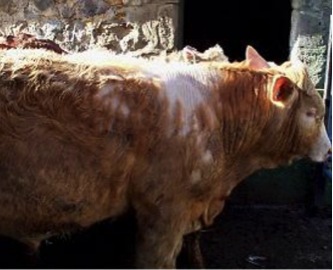 Regardless of whether the parasites appear to be causing an issue or not, they should still be considered clinically significant. If deemed appropriate, investigation to determine an underlying cause should be considered as well as treatment of the affected stock with an appropriate product.

The presence of lice on sheep reflects poorly upon biosecurity and the flock health plan. Any infestation must prompt a review of these measures to avoid a more sinister disease, for example sheep scab, becoming established on farm.

The adult louse will lay eggs on the host animal which will stick to the hair. These eggs will then hatch in to the nymph stage. The size of the lice increases through a series of nymphal moults until the adult stage is reached. All of these stages occur simultaneously on the host animal. 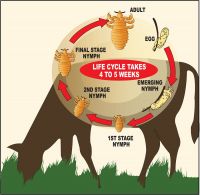 Why do lice thrive in the winter?

Lice are a host-dependent parasite. They cannot survive for more than 3-5 days without a host to feed from. When animals are housed over winter they are in closer proximity, meaning that lice can easily spread from animal to animal. When housed, the hair/wool will grow longer allowing the lice better protection from the elements and somewhere to hide.

In the UK the worst times for lice are late winter and early spring. The quickest increase is always seen in the winter and is accountable to housing factors. The spring infestation is usually the result of build up over the housing period. In spring the coat/fleece is at its thickest and provides optimum conditions for the lice to thrive; i.e. shelter and a humid habitat.

When the winter coat is shed or fleece is sheared an abrupt drop in lice numbers occurs. Over summer numbers tend to stay low as less direct contact occurs between animals and a thin coat/fleece exposes lice to high temperatures/direct sunlight which they find unfavourable.

In certain situations the lice population can rapidly grow and overwhelm the hosts coping ability. In such infestations you will observe:

Bovicola bovis is one of the most common parasites to affect cattle. Its normal distribution is the head, neck, shoulders, back and rump (occasionally the tail switch). If extreme infestations the lice may spread down the sides and even cover the rest of the body! The adult louse is only 2mm long and 0.5mm wide! In comparison to its body the head is bulky. The louse is reddish-brown in colour with dark transverse bands across its abdomen. This louse is guilty of causing intense pruritus to the host. A severe skin reaction causes hairs to loosen and self-trauma will lead to patches being pulled/ rubbed off. Self-trauma may also cause wounds, bruises or rough skin which in turn may lead to secondary bacterial infections.

We have three species of sucking lice found on cattle in the UK.

Linognathus vituli (the long-nosed cattle louse) is generally found around the head, neck and dewlap. It is approximately 2.5mm in size and has an elongated, pointed head and body. Prior to feeding the louse is red/brown however after ingesting blood the mite will appear blue/black. It has strong claws on all feet which allow this louse to cling to the hairs.

Haematopinus eurysternus is known as the short nosed louse and is commonly found on the skin of the poll, at the base of the horns and ears and around the eyes and nostrils and the tail switch. It’s one of the largest lice of domestic animals measuring up to 5mm in length!

Solenoptes capillatus is known as the little blue cattle louse and tends to cluster on the face, neck, head, under the jaws and may spread to the shoulders, back and tail when infestation is heavy. It’s the smallest of the sucking lice at only 1-1.5mm.

Sheep within the UK are only affected by chewing lice.

Bovicola ovis is most common and disrupts feeding patterns, leads to fleece damage/loss and self-inflicted trauma. Spread occurs from animal to animal by close contact. The slow reproductive capacity of Bovicola ovis results in a gradual build-up of louse numbers over several months. This louse is surprisingly large at around 3mm in length.

A small pale to red/brown insect with a broad head and chewing mouthparts.

When dealing with lice infestation it’s important to differentiate between these groups as treatment strategies may vary however most topical lice treatments will tackle both.

Diagnosis can be visual. If you part the hair (especially on the midline) you can see white specks which looks like a course white powder sprinkled throughout the hair.

Samples should be obtained- either a coat brushing or a ‘sellotape test’ which can be viewed under the microscope back at the practice.

Farmers should always seek a diagnosis before treatment. This is especially true in sheep as lice infestation and sheep scab are frequently confused.

When introducing new animals to the herd/flock they should be treated and quarantined. This is not only important from a parasite burden perspective but also from a biosecurity point of view as Linognathus vituli has the potential to transmit anaplasmosis (tick-borne fever) and dermatomycosis (ringworm) in cattle. It is far more economical, less time consuming and better for welfare to prevent infestation rather than deal with the consequences.

Shearing reduces lice populations by 30-50% so is beneficial from a parasite point of view in addition to the welfare benefits.

Ensuring stock are generally in good health is also of benefit as lice may take advantage of unthrifty animals and quickly overwhelm them. As vets this allows us the opportunity to create herd or flock health plans with our farmers to ensure that we are promoting best practice in every aspect of production.

The ideal time to control or eradicate sheep lice is following shearing. Shearing removes the majority of lice present in the fleece, and when the wool is short, it is easier for a pour-on formulation to spread around the body. Farmers often only treat for lice in the winter so it is important to remind them in the summer of the benefits of an off shears treatment using a product licenced for lice. From a dipping perspective, it is not advisable to dip in the weeks immediately following shearing.

A range of synthetic pyrethroids in a spot on or pour on formulation are available (Deltamethrin, cypermethrin, permethrin). Injectable macrocyclic lactones are also available (Ivermectin, eprinomectin, moxidectin, doramectin) however injectable treatments have variable efficacy against lice.

In general the injectable preparations will treat sucking lice better than they will treat chewing lice. Owing to this it’s better, if chewing lice are suspected, to select a pour on/spot on treatment.

Most preparations are not licenced to kill eggs and as a result they may hatch and re-establish infestation post-treatment. Generally products with efficacy of >2 weeks will be sufficient to kill any parasites which hatch following treatment. Products with an efficacy of less than 2 weeks will require a second treatment.

It is important to recognise that in full fleeced, heavily infested sheep treatment with a synthetic pyrethroid pour-on can take several weeks to reach insecticidal concentration and the farmer should always be made aware of this. If the farmer is not informed they may perceive that the treatment has failed or begin to wonder if another parasite may be causing the clinical signs. This again reinforces the need for a definitive diagnosis of the parasite causing pruritus so that the most appropriate and effective treatment can be prescribed.

The option to dip must be seriously considered where possible. Dipping correctly in a plunge bath is the only treatment that will give 100% efficacy against all ectoparasites that affect UK sheep including lice, scab and blowfly strike. While dipping has declined since the elimination of compulsory dipping, the re-emergence of scab and the risk of 3-ML resistance is forcing sheep advisors to reconsider the practice and the challenge now is to help facilitate farmers to dip safely and correctly.

Treatment plans should always be tailored to individual farms to promote the responsible use of veterinary medicinal products. Generally lice can be controlled with a single treatment in late autumn/early winter and by quarantining and treating any animals brought on to the farm.